My distant memories of school biology lessons were revived when Mirella drew an impromptu diagram  of basics of neuronal functioning in our body. This impromptu sketch helped her to explain to me that neurons communicate via chemical and electrical synapses, in a process known as synaptic transmission. They are thus categorised as electrically excitable cells housed in the human nervous system, whose function it is to process and transmit information.

END_OF_DOCUMENT_TOKEN_TO_BE_REPLACED

As my laboratory observations and my discussions with Mirella continue my thoughts begin to turn to how I might recontextualise this complex scientific data to create interactive artworks in the future….??

The neuronal responses remind me of my doctoral research project when I became interested in the so called ‘vital force’ possessed by the human body which could be regarded as an internal machine-like power known as ‘animal electricity’. I was particularly interested in the historical development of experiments that sought to identify and even locate this vital force.

This early research depended on the introduction of what were then cutting edge machines in the area of galvanics. Luigi Galvani (1737 – 1798) was an Italian physician, physicist, biologist and philosopher, who is credited with being the first to discover ‘animal electricity’ when he passed an electric current through frog’s legs, causing them to twitch. Initially known as ‘galvanism’, this is a forerunner of the contemporary scientific technique of electrophysiology .

Subsequently, Carlo Matteucci (1811-1868) expanded on this research creating a ‘rheoscopic frog’, leading to the discovery,  in approximately 1865, of a nerve’s action potentials by Julius Bernstein and Emil du Bois-Reymond. Currently, bio-electricity continues to be central to neurological experiments and is measured by techniques such as calcium imaging and electrophysiology.

END_OF_DOCUMENT_TOKEN_TO_BE_REPLACED

I was able to spend some time with Research Assistant: Sara Miellet, during which she explained more about the processes required to successfully  culture organoids. As mentioned in my last post, organoids are small, three-dimensional structures derived from stem cells. They are useful to researchers because they mimic features of various selected organs in the human body.

The Dottori laboratory is interested in modelling brain development by generating neural stem cells, derived from human stem cells, in vitro in the form of organoids for research purposes. The cells in an oganoid have been shown to have the remarkable ability to self-organise into complex structures.

The image above shows an example of cellular self-organisation in a developing neuronal organoid. These structures are called neural rosettes because they closely resemble the formation of the neural tube in a developing human embryo. This neural tube subsequently evolves in to the embryonic brain and spinal cord. END_OF_DOCUMENT_TOKEN_TO_BE_REPLACED

The Tissue culture Lab is a designated space where, as the name implies, cells are cultured for distribution to researchers. It contains centrifuges, various types of incubators, microscopes, computers and a fume cupboard, to name but a few of the required items.

Mitchell & I donned our gowns and put on rubber gloves. During this session we frequently disinfected our gloves by spraying with alcohol.  A single virus can wipe out a whole set of cultures so obviously we erred on the side of caution! 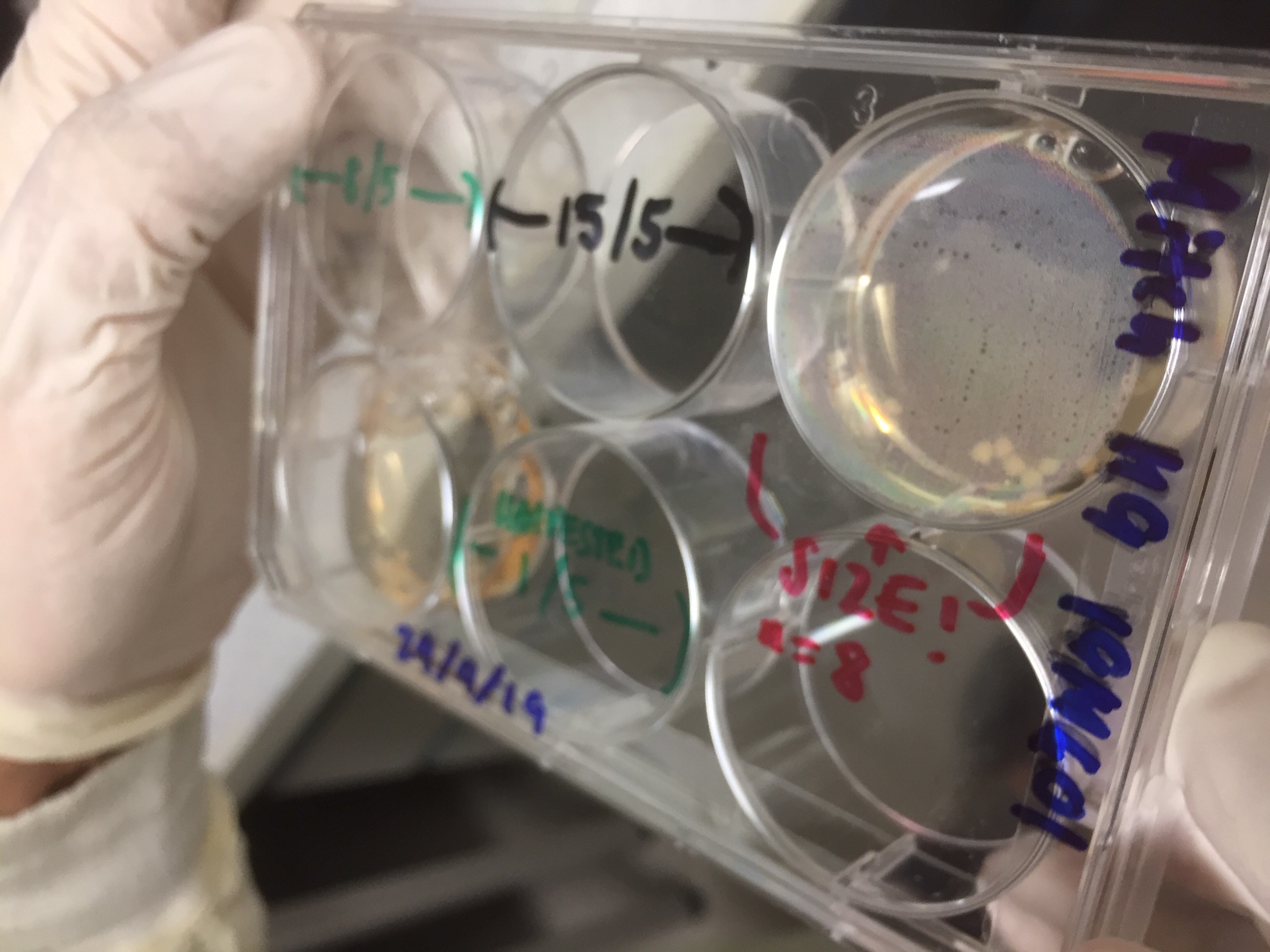 In this tray of organoid samples, removed briefly from an incubator, you can just see some cream colored circular organoids developing in the top right hand tray. (Image Trish Adams)

END_OF_DOCUMENT_TOKEN_TO_BE_REPLACED

Now that the Biosafety requirements have been fulfilled I am able to enter the lab and begin to explore the research going on there.  I attended a weekly meeting where the lab members gave updates on their research projects and immediately realised how much I have to learn!

My main  focus for this Synapse project is the sensory responses of  neurons using specific progenitor cells in the form of 3D in vitro cultured cellular organisms known as ‘organoids’ : 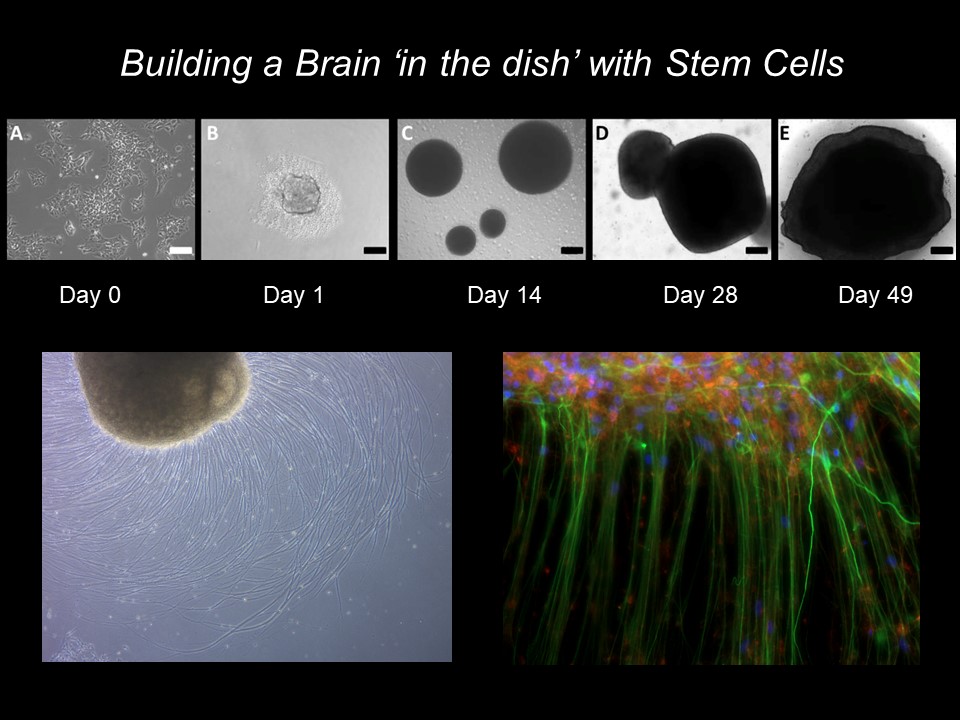 END_OF_DOCUMENT_TOKEN_TO_BE_REPLACED

For me, entering a new laboratory, with all that entails, once again highlights the shifting relationship between art and science and the motivation driving artists to engage in this field. The question ‘Why Art and Science’ is central to the interdisciplinary debate and my research in this area  is constantly being updated – most recently in relation to my collaboration with Mirella, presented in 2018 at SPECTRA – https://spectra.org.au/ .

Embracing the spirit of ‘what if’, my practical laboratory work frequently involves adopting the role of a ‘human guinea pig’ and experimenting on my own cells – a methodology that contravenes the so-called objectivity of accepted laboratory practices and puts me at the centre of the process. My aim is to  generate empathy between the interactive artwork, derived from the scientific data, and the viewer/participant.

END_OF_DOCUMENT_TOKEN_TO_BE_REPLACED 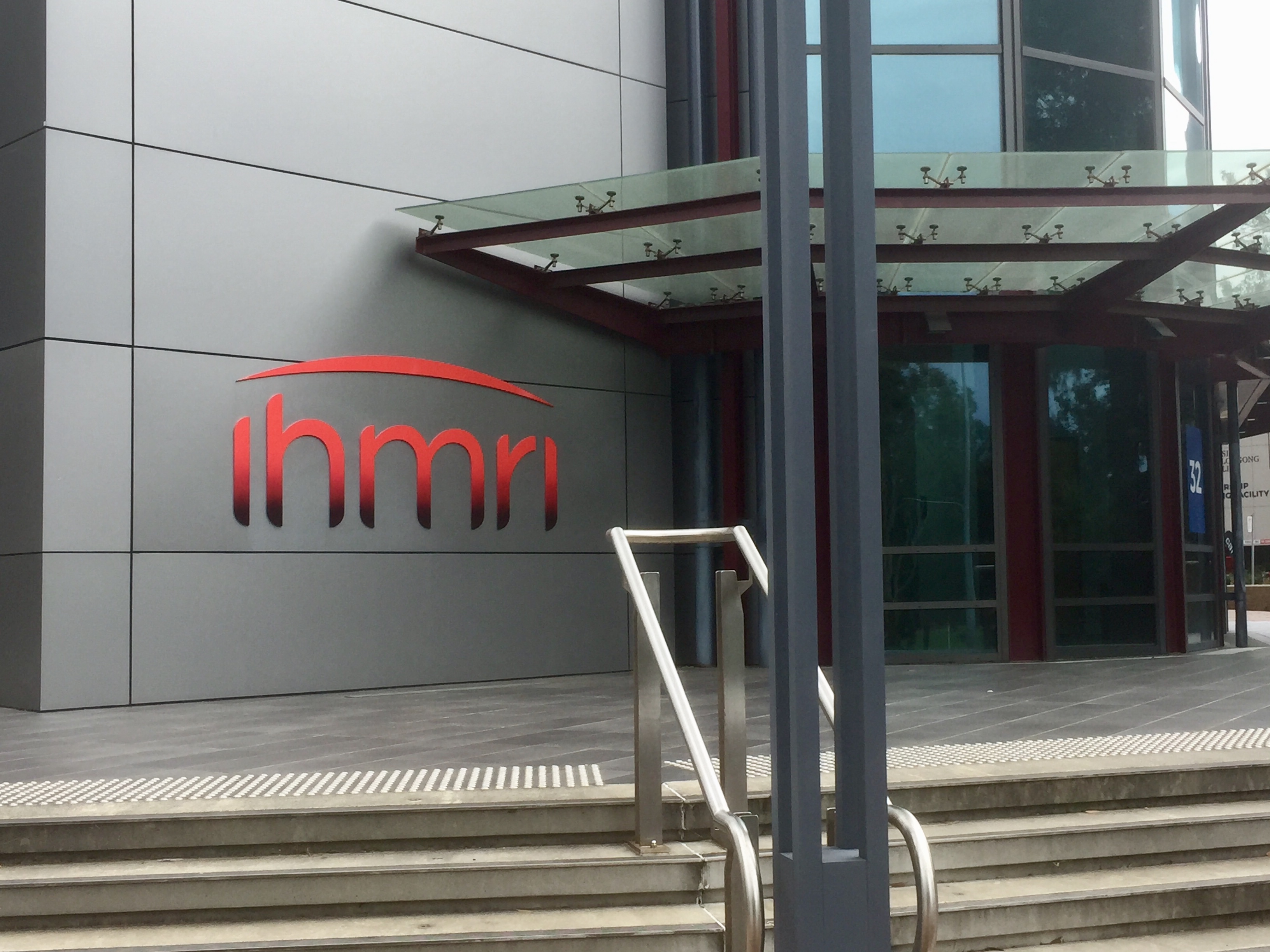 In the days when I first entered laboratories as an observer – and I’m going back over twenty years now….all it took to visit a laboratory was an initial introduction to the relevant scientists. Once introduced to the research group one could come & go as an observer, reveling in the fascinating other world of scientific exploration. For me, at this time, even routine processes such as the Northern Blot protocols were a source of creative stimulus.

Fast forward to 2019 when laboratory access has become increasingly regulated. So it comes as no surprise that, before I can embark on this Synapse residency, there is plenty of paperwork to be completed and an Admin. Orientation to undergo.

My Orientation took place yesterday, conducted by the amazingly efficient Linda Deitch – four floors of high end machines, materials and protocols for me to view and absorb – next I need to complete the on-line Biosafety & GMO(OGTR) module, with the help of the 33 page Biological Safety Manual & Guidelines !!

Then – and only then – will I be free to take up my new Honorary Fellowship and embark on my exciting Synapse research project with Mirella and her team.

Recipient of the 2019 Synapse Residency Program